I decided to compare a few export and import maps from Worldmapper including toys, clothing, and wood & paper. I included a "regular" map here at the top for easier comparison.

The first comparison I made was the import and export of toys. It's so easy to see that a very large number of toys are exported from China, while the vast majority are imported in the United States. This relates to globalization since it has to do with trade between different countries. It was interesting to see this comparison because it really shows how much China exports, and that's just in toys! Growing up, I started noticing that many toys were made in China so the export map was not a big surprise to me. What was surprising, was that the United States seemed like the only large importer. I expected other countries to have a larger import than they did, which may be something good to note. Does this show that the United States is caught up in material things like toys more than other countries??

This map shows the import and export comparison for clothing. This map does a good job showing how companies can outsource their businesses to places where it is cheaper to make their products. For example, many companies in the United States are outsourcing to places like China and India. This is very evident on the export map. China and India are among the most noticeable exporting countries for clothing. On the import map, we can see that China and India are practically non-existent, while the United States and most of Europe are large importers.

Finally, I looked at the export and import of wood and paper. I wasn't sure what to expect when I looked at these two maps. I figured that the United States would be a big importer, but I didn't know what to expect anywhere else. I was surprised to see that Japan had such a large import. In terms of exporting, I was surprised by how much is exported by South America, Europe, and Canada.

After looking at just a few maps and comparing the imports and exports, we can see how global trade impacts almost everyone.

In the movie, Slum dog Millionaire, we see the boys end up at the Taj Mahal. I decided to do some research on this historical site.

The Taj Mahal was built by Muslim emperor Shah Jahan in memory of his dear wife Mumtaz Mahal in Agra, India. Many sources say that Shah Jahan and Mumtaz Mahal were very close, which is why Shah decided to build the monument. Mumtaz is said to have died during child birth of their 14th child.
The city of Agra can be found southeast from New Delhi and lies along the Yamuna River. 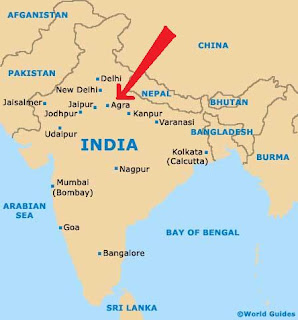 The building of the Taj Mahal was started in 1631, soon after Mumtaz Mahal's death, and completed somewhere between 1648 and 1653, taking 17-22 years to be built. Over 22,00 men worked on the building, using over 1,000 elephants to transport materials. Several buildings, including the main gateway, a mosque, rest house, tomb, and a guest house, as well as a garden surround the Taj Mahal.

Many visitors come to the Taj Mahal whenever it is open to learn the story of why it was built and who it was built for. Some have even come to call it "the epitome of love."

I chose this National Geographic video because of its array of information about Luang Prabang, which is located in Laos. The video calls Laos a "real hidden gem of a destination." This caught my attention right away, wondering what might make this place so special. The video goes on to visit Luang Prabang, a city in Laos. I was surprised to hear how much detail the video gave concerning the geography of the city. It mentions the many Buddhist that live there and the daily rituals of the monks, giving the viewer an idea of the religion in the city. It mentions that the dry and cool season is between November and February, giving viewers an idea of the climate calender. Also mentioned, you could expect to see many "ornate temples" while visiting Luang Prabang. The narrator recommends the best clothing for a trip there, including shoes that are easy to remove, and conservative clothing. By mentioning these things, we are given insight into the culture and traditions of those living in Luang Prabang. I thought that this video was a good indicator of the geography   of the city, Luang Prabang in Laos.
Posted by Kelsie at 4:05 PM No comments: